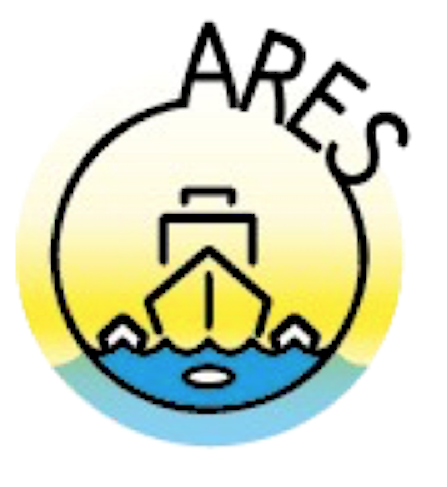 The goal of the project is the study and development of the technologies necessary for the construction of a Ship Extended with a fleet of surface and underwater autonomous vehicles. The functionality of the developed technologies will be validated with the support of infrastructures (multipurpose vessels, robots, observation networks, etc.) made available by the partnership and, where necessary, appropriately adapted. In order to develop the technology needed to reach such an ambitious goal, ARES identifies four main subsystems and several short, medium and long-term development objectives of the current state of Italian Blue Growth industry and research that are linked to the above-mentioned subsystems. The four main tasks are: the extended Ship, underwater and surface-based robots, Autonomous Marine Vehicles (AMV) instrumentation, ICT systems on the ground. The extended ship, involves shipbuilers, shipowner and marine engineering industry with the aim:in the short term, of performing cooperative operations between towed robotic systems (TROV) and autonomous vehicles using one or more support vessels, and of providing an existing multipurpose vessel with a Launch And Recovery System (LARS) capable of supporting not only AUV and ASV, but also already operational tethered robots (ROVs/TROVs); in the medium term to enrich the armament with an innovative multipurpose vessels equipped to work with new-generation AMVs; in the long run, to build dual-based ships capable of working in operational scenarios of different nature;Underwater and surface-based robots, involves public research, Universities and SMEs active in the automation area with the short-term goal of developing low-cost AMV; in the medium term, to market a family of cooperative portable and compact submarine and surface vehicles characterized by small size, small weights and low consumptions and costs; in the long run, characterized by an innovative rapid prototyping system also on board the ship; AMV instrumentation, involve universities and public research institutions with the short-term goal of developing laboratory prototypes of AMV instruments and sensors such as mini-radar/IR/optical for obstacles detection, and optical and chemical-physic-biotic sensors for water analysis, and demonstrate field functionality using the underwater and surface submarine robots; in the medium to long time to engineer these instrumentations as commercial products; ICT systems on the ground, involve universities, public research institutes and SMEs active in the ICT, aerospace and logistics sectors with the goal, in the short run, to develop prototypes of large-data management systems, and now-casting planning systems; in the medium to long time to engineer them as commercial products. The overall purpose of the project, namely the creation of an RD & I ecosystem along the CTN BIG Marine Shipyard and Marine Robotics Trajectory, also envisages the following objectives:

Moreover, since legal aspects are a bottleneck for the introduction of services based on the use of autonomous vessels in areas subject to commercial and maritime traffic, an additional area of activity is a key part of ARES. This involves universities, public research entities, regulators, and standardization bodies with the short-term objective of defining a clear framework of the rules existing in the world for the regulation of the AMV. The objective is defining standards for the various subsystems and for the overall integrated system in the medium and long term respectively.